Home renovation projects are incredibly nerve-wracking for consumers: They require building significant trust with architects, builders, and other stakeholders; They are hugely expensive, and often full of unexpected costs, and most people have little or no context for managing projects of such scale. Remarkably, these challenges have worked to help Resi grow into The United Kingdom’s largest architectural platform; a one-stop destination for consumers looking to design, build and finance home renovation projects.

This breakout growth success story has all happened in just 2 ½ short years, but with that success came some significant challenges. In this growth study, we will learn how innovative leadership helped overcome these challenges and has informed an unstoppable culture of growth.

Founder and CEO, Alexandra DePledge, started Resi when she herself became frustrated with a home renovation project. She realized, she and others did not want to pay an architect $4,000 dollars just to find out how much the project would cost, what could or could not be built, what value would it add, and what it would look like when it was done.

She wanted to answer these questions and knew that others facing these daunting tasks would as well. It would have been easy to over engineer a solution to the entire set of challenges that come with a home renovation project, but DePledge and her time wisely started with a solution-focused on just one of the problems. Product-Market Fit came immediately, and from there they relied on users to direct their expansion. “So that’s kind of the gift I think. Letting the market lead us rather than us trying to lead the market,” explains DePledge.

As user feedback informed each next step, leadership instilled a data-driven culture of testing and optimization to drive growth. Interestingly, they never formalized a Northstar metric as part of their growth process, although DePledge and her team are excited to do so moving forward.

Throughout Resi’s story, we see how these ingredients of growth–clear product/market fit, a solid growth engine, and innovative leadership approaches–all center around a relentless commitment to the mission, and how that commitment has served as the driving force behind team alignment. It is a formula that has worked well for this burgeoning startup.

As Resi’s business quickly grew, the early team who’s passion and innovation had driven the company’s early success were starting to burn out. More of their time and energy was being spent supporting the business-as-usual needs of their early innovations, rather than in creating new ones. At the same time, individuals who were passionate about the rigor and process needed to support a top-notch user experience were instead becoming bogged down supporting testing and optimization efforts that did not really excite them.

The company’s leadership team did not want to slow down growth but knew that without a radical departure from the status quo, the velocity of growth that was so exciting would ultimately cause the company to collapse upon itself.

So Resi effectively split the company into two distinct structural units: One team would focus solely on testing and optimizing new concepts to drive new value for the next generation of users, while a second team could focus on ensuring that existing users would be continuously wowed by the current experience.

When the innovation team developed and demonstrated the value of a new concept it had tested, it would then work with the business as a usual team to smoothly “handoff” each new solution. This approach has worked to keep team members consistently invigorated, even as the velocity of innovation continues to increase.

A Growth Engine to Support an Infrequent Use Case 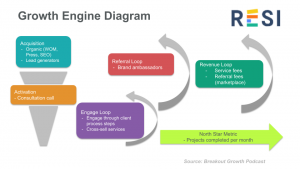 As one of the single largest expenditures in a person’s lifetime, home renovation projects are very infrequent events. Resi’s founders had previously built and sold a marketplace for finding domestic cleaners, so they understood that not all businesses need to rely on retention and engagement to support growth, but the architectural space would warrant an even greater focus on a one-time use business.

The company’s leadership team understood that gaining customer trust was going to be key, so they started by building only one new concept at a time, and focused on making that offering as compelling as possible before adding additional services. Although this did lead to the burnout and organizational challenges described earlier, it also drove an amazingly powerful reputation for the business. Building and servicing each component well became paramount to the company’s success and informed the organization’s entire approach to growth.

Resi’s commitment to the trust-driven user experience is further exemplified by their renovation “hotline”. Here, the company offers free advice to anyone navigating the complexities of home renovation design, finance, and construction. The average Resi purchase is north of $3,300, but by offering free advice and offering extensive free content to help consumers manage their home renovation projects, the company has fostered excellent brand awareness and word-of-mouth growth.

The company does rely on a mixture of channels to drive growth. They take pride in their successful SEO efforts, and paid marketing efforts are responsible for about half of the company’s new user acquisition. CEO Alexandra DePledge feels that paid channels are an important part of the mix for growing companies, but that “they cannot be everything,” as a company looks to build an audience.

With an infrequent use case, Resi could easily be overlooked by venture capitalists, and DePledge seems comfortable with that: “I don’t care, I am fine with that,” she says almost defiantly. She and her team focus on mission and use the unique nature of their market to create value for customers and the company.

With an average basket size exceeding $3000, each customer brings significant value, while strong referrals keep acquisition costs to just a few hundred dollars. Resi is able to drive efficiencies through the use of technology and data, and by automating processes wherever possible.

Resi’s team is now about 70 people, and the split leadership approach continues to strengthen the mission-driven culture. This has been fundamental to the breakout growth that has made Resi the UK’s Largest Architectural Platform in just 2 1/2 years. Learn more about their approach in Sean Ellis’s Breakout Growth Podcast interview with Alexandra DePledge, CEO of Resi.

Previous Post TransferWise – A Mission to Move the World’s Money for Next to Nothing
Next Post Acadium (Formerly GenM) – An Apprentice Marketplace Connecting 30,000 Businesses with 60,000 Marketing Apprentices