A rapidly expanding business is the hallmark of strong alignment between a company’s mission and its Product/Market fit, but it also brings with it significant challenges as the organization struggles to manage the chaotic nature of unbridled growth. TransferWise has demonstrated that this kind of success can be sustained even as it continues to double its customer base every nine months. With an expanding team of now over 1700 employees their story is the story of breakout growth.

In this growth study, we will explore the drivers behind their explosive growth and find out why consumers trust TransferWise more than their own banks to move money around the world. At the same time, we will look to understand how the business manages its continuous cycle of expansion through grit, hustle, and a narrowing focus on delivering value back to customers.

The TransferWise story begins with two friends, founders Kristo Käärmann and Taavet Hinrikus living in two different countries. Both had a need to transfer money between the two countries they were living in, and both were frustrated with the high costs banks charged for the service. They found a workaround where they essentially paid each other’s bills, and turned that concept into the largest money transferring service in the world. They identified a need, found a better way, and iterated to Product/Market fit.

Making it their mission to make the world’s money move for next to nothing, they identified the fundamental challenge they would have to overcome to scale their business: while millions of people needed to transfer money internationally, most had no idea that they were paying too much for this service, or that there could be another way. 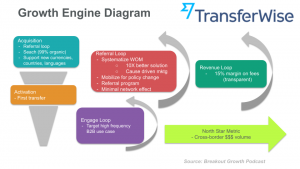 Scaling the business meant driving exposure around the world, but getting paid channels to work proved difficult. Google ads that focused on strong intent did not work because people were not aware that they had a problem that needed solving, while mass broadcasting channels were expensive and did not drive trust. Consumers were more likely to trust their bank than to trust an ad on the side of a bus when it came to moving sums of money that might equal all of their life savings.

As they tested these channels, TransferWise’s growth team learned that their largest growth potential was in leveraging their users as advocates. Customer advocacy offered a more scalable channel without the expense and trust issues that plagued their paid marketing efforts. Neilan Peiris, TransferWise’s VP of Growth explains, “Getting our customers to trust us was hard, getting our customers to trust their friends was easier.”

They put extreme focus on delighting their customers at every touchpoint to turn users into advocates and drive referral loops. It worked and they have never lost sight of the value of this effort throughout their rapid expansion process.

As they have grown, the TransferWise growth team has monitored their Net Promoter Score closely to ensure that their users were in-fact excited to advocate on behalf of the product. Optimizing against this metric for the growth team means working across the organization to ensure that individuals, teams, other executives, and even the board of directors are aligned.

Today, TransferWise is the leader in cross border money movement, moving over (£)3 Billion in Monthly International Money Transfers. With an astonishing Net Promoter Score around 86%, the company is able to drive its viral loops despite some inherent headwinds: Money transfers are often one-way, and in many cases one-time events, so even a good experience doesn’t have a natural network effect.

To overcome these challenges, TransferWise, relies on delivering a 10X better product as compared to alternative money transferring options (especially when it comes to price). Their target users often know other target users (students know student, people buying houses in Spain, know other people buying houses in Spain, etc.) and customer success stories being passed between peers has delivered a sustainable growth channel based on referrals.

Their team, which we mentioned now consists of more than 1700 personnel was less than 40 employees just eight years ago.

Keeping a quickly multiplying employee base aligned has taken intentional leadership. The growth team has evolved their Northstar Metric three times to keep everyone focused and inspired. Today, cross-border volume is their NSM. While leadership, is, of course, focused on revenue, aligning against these metrics on a team level has kept morale and allegiance to the company’s mission on track across the organization.

The growth team also identified the challenges associated with iterating around an infrequent use case for its core service as a key point for testing. They very intentionally focused on ideating and optimizing referral loops instead of focusing on strong engagement loops. This is a great example of an organization fundamentally understanding its users and using that knowledge to focus resources on the correct growth levers.

TransferWise is now looking to leverage its growth process to expand further into B2B markets, which likely will have more frequent use cases than their core B2C business (B2C is currently 80% of their user base). Learn more about TransferWise’s exciting growth story in Sean Ellis’s Breakout Growth Podcast interview with Neilan Peiris, TransferWise’s VP of Growth.